More than a year passed since I started learning Japanese

It's difficult to calculate how much time did I really spent on learning Japanese. I started in October 2012 and and I have been spending ~2-3 hours every day and even more on weekends for several months. Then I began slowing down. I even made a break in July - October. Recently I spend ~1-2 hours every day.

I passed different stages of motivation and success, some of them can be described like this:

Learning a foreign language, which radically differs from those you know, is really difficult. Also, if you learn by yourself - without teachers or textbooks - you can easily take a wrong path and lose your way.
I had successes and failures, I made a lot of mistakes, I even lost motivation for several months due to encountered problems.
But since August I renew studying German and realized that I should try learning Japanese again.
I should lower my expectations and just practice again and again.

So for a couple of months since last October I did it. Every day I read Japanese news, this really was interesting and helpful.
But with time I realized once again that to do something good, you should be interested in it. But reading news was becoming more and more boring. I had to find something else.

I turned to light novels. In fact I have a list of Japanese light novels which I want to read. I understood that it would be difficult... and it was really so.
I made one more mistake here - the novel, which I chose, wasn't interesting enough. Before I noticed, I began spending less than an hour each day on studying Japanese.

It was sad, so in January I decided to turn to origins.

The last thing which pushed me into studying Japanese in October 2012 was one visual novel.

I played it in English and it really captivated me. I completed it twice and then I found out that the version which I played wasn't the full game. Of course I wanted to play the full game, but I faced a critical problem - the full version wasn't translated from Japanese into English.
With this my desire to learn Japanese prevailed over my laziness and hesitancy, and I began my adventure of acquiring the knowledge of the new language.
And my target was to play this game in Japanese in a year.

I didn't have high enough level of Japanese in October, so I failed this goal


And so in January I decided to try.
This is difficult, but possible. Here is a screenshot of my desktop: 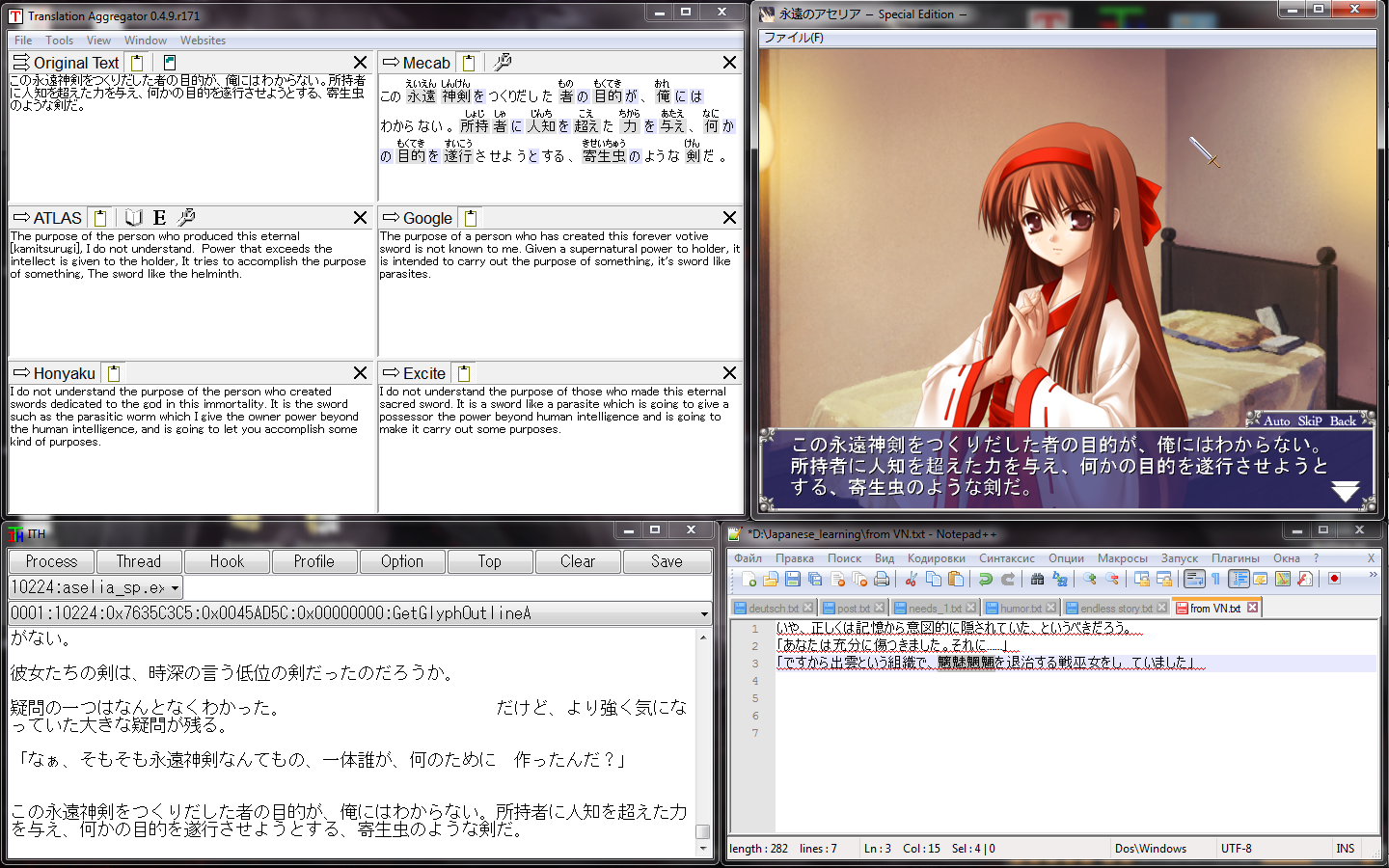 Visual novel is in top-right corner.
When a new text line appears, it is captured and recognized by a program in low-left corner.
The text is copied in clipboard. And from clipboard it captured by a program in top-left corner.
This program shows furigana for kanji and used several dictionaries (i set four) to translate text in English.
And I copy interesting sentences to a notepad to study later.

It's a pity though that only "normal text" can be captured; this, for example, I have to translate by myself: 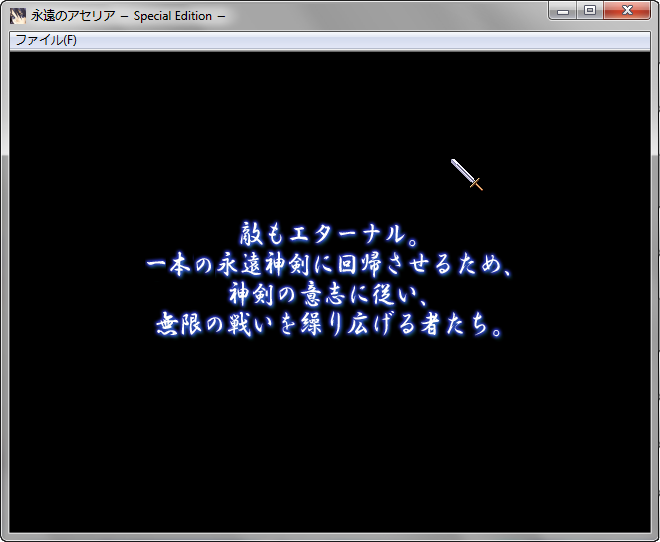 At last I completed my original target - completing the game in Japanese. But I still have a long way to go.

Superstition: horseshoe for good luck
People from many countries believe that the horseshoe brings good luck. As a result, there are many legends explaining the emergence of this superstition. They say that this omen appeared in ancient Egypt. And these horses were shod with golden horseshoes. Horses often lost golden horseshoe. Naturally, the one who found the golden horseshoe, could consider himself lucky.
Also there is a legend about the devil and the Holy Duncan smith (or an ordinary blacksmith). The devil asked the blacksmith to shoe his hoof, and instead was chained to the wall. Blacksmith released the devil only when he vowed not to enter the house with a horseshoe hanging.
In reality, any horseshoe cost money, so finding it was useful. Probably this is how the superstition appeared.
In different countries, people hang a horseshoe differently. In Russia, a horseshoe hanging horns down protects from evil. If you hang a horseshoe horns up, it will bring good luck . In other countries they say that if you hang a horseshoe horns down, happiness will fill the house. Mexicans decorate a horseshoe with ribbons and coins, and then hang up high, so that no one could touch it. And the Italians hang a horseshoe so that each newcomer touched it. In any case, everyone believes that founded horseshoe is symbol of good luck.

Russian superstition: aspen
The peasants in Russia had an ambivalent attitude towards aspen. On the one hand, according to the Bible Jesus' cross was made of aspen. Therefore aspen was considered to be a cursed tree. On the other hand, aspen was considered a talisman and was useful in the household. Slavs believed that Aspen had healing properties. If the patient has a fever, you should to cut his hair and nails and hide in aspen tree stump, the patient will recover . Any sick person can be cured, after sitting on fresh aspen stump . If we put an aspen branch in bed, it will heal insomnia.
Generally speaking a decoction of the bark and leaves of aspen can actually cure many diseases. Also houses built of aspen stand for very long. When burning aspen logs soot does not appear.
Aspen is an amazing tree!