Some things change, others stay the same.

More that 1.5 years ago I have decided to change my career to Data Science and Machine Learning. Since that fateful decision I have been spending most of my free time on getting new knowledge and skills. This is quite fun, though as a result some other things need to be sacrificed.

There are so many things to learn: fundamental knowledge is necessary (like statistics and math), programming (improving Python skills and possibly studying a new language), analytics and ML itself.

Telegram chat-bot
Some time ago I took a course on NLP on Coursera and mostly liked it. On the one hand it gave me a lot of useful practical and theoretical information, on the other hand sometimes there was too much theory, also writing code in Tensorflow and debugging it is tough (thanks to this I liked Keras even more :) ).
The final task was to build a Telegram chatbot. The main functionality was finding an intent of the question and giving the appropriate answer. There were two main intents. If the question was related to programming, the bot should send a relevant answer on Stackoverflow. Or if the user simply wanted to talk, bot should be able to chatter. For a default implementation a trained chatbot model was offered.
And then there was an additional (so called honor) assignment - the challenge was to build and train conversational model by ourselves.
I have successfully done it, here is the link to the bot and the link to the github.
I won't bother you with technical details (if you are interesting, you can read more on github), I'll just describe the bot functionality: 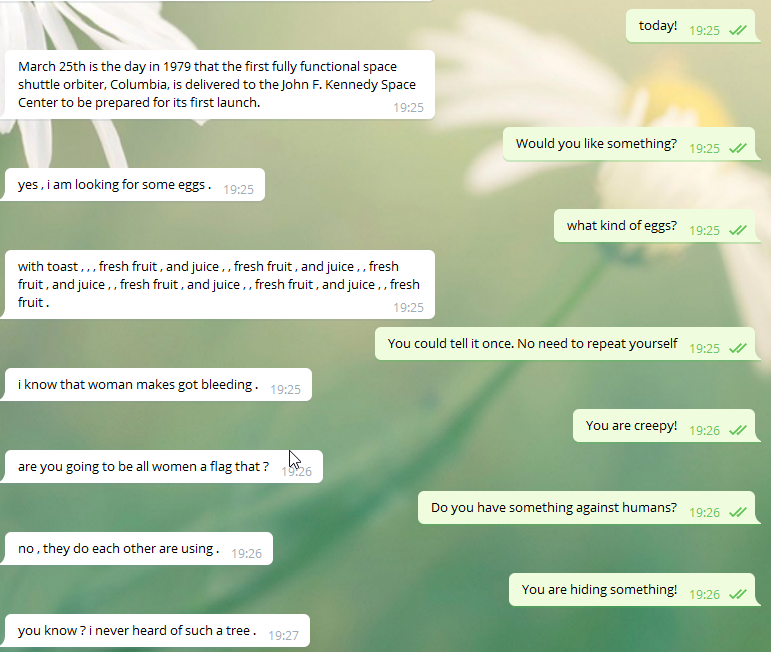 Working on this project was really fun and I learned a lot of interesting things - for example, how to host a running bot on Amazon EC2.

DonorsChoose competition on Kaggle
Founded in 2000 by a high school teacher in the Bronx, DonorsChoose.org empowers public school teachers from across the country to request much-needed materials and experiences for their students. At any given time, there are thousands of classroom requests that can be brought to life with a gift of any amount. DonorsChoose.org receives hundreds of thousands of project proposals each year for classroom projects in need of funding. Right now, a large number of volunteers is needed to manually screen each submission before it's approved to be posted on the DonorsChoose.org website.
So the fund has created a challenge on Kaggle to help building a model to automatically approve applications.
The prizes are awarded for the most voted kernels, so it isn't necessary to build a high accuracy model.
I have dediced to take part and here is my exploratory data analysis.

Other things
Sadly, I have little time for studying foreign languages currently... so I try my best to keep my knowledge: my phone system language is Spanish, I try to read Spanish and German news, still review flashcards in Anki and sometimes read manga in Japanese.

Last year I started reading indie books and some of them are true gems! Recently I have discovered "Chronicles of the Black Gate Series". This wonderful series takes place in the world, where humans believe that place in society is determined by your birth. Depending on place of your birth you could be a warrior, slave or even heretic. Thanks to reincarnation you can move to a better or worse place. There are multiple points of views ranging from teenagers to adults. Character development is quite believable. A lot of characters face a crisis of belief which results in strengthening of beliefs of some characters and changing or bending of beliefs by others. . Price which is paid for success - and sometimes it is too high! And speeches which characters give are really impressive and strike to the core. I really liked the series.
Posted by Erlemar at 3/25/2018 07:44:00 PM