So the summer is ending. Now it is a good time to think about the things which were achieved during these three months.

So, what have I achieved with studying Japanese?
Sadly, but not really much:
In June and in the beginning of July I continued reading manga. It was going not as fast as I would like, so I decided to take a break and think about new ways or learning. But I still continue reviewing the words in Anki.

Several weeks later due to certain circumstances I felt motivated to study... German.
In fact this wasn't very sudden: I have been learning German for two years in university (around 5 years ago). The course was really intensive, it was very tough and often boring, but in the end I was able to speak about general topics without serious problems. Several times during the past years I tried renewing my knowledge of German but to no success.

So now I wanted to study German again. The question was - how.
After some thoughts I began with grammar, I used this great book:
"German: An Essential Grammar" by Bruce Donaldson
It was really useful, as it gave the overview of almost all grammar points in the language.


And then I found a really effective method; to tell the truth I myself thought about something like it.
So what is it about?

What do we really need to learn the language?


So, if we want to learn the language fast, we should try receive and remember more new information per time period. Well this is understandable.

And there is a fun way of doing all of this at the same time. We need three things:


For me this was rather effective: this way I listened in German and read in English four Harry Potter books.
When I took the fifth book in German, I was able to understand almost the half of the text.

Well, really it would be better to listen/read the same text several times for better comprehension, but for me even one time works well.

By the way, the name of the method is Listening-Reading.

Well this was good, but after I tried to construct the sentences myself, I realized that I really to practice with grammar. Using grammar books is rather boring, so I looked for something which would be more fun and succeeded!

I found the site DuoLingo.

This is a fun and useful site: 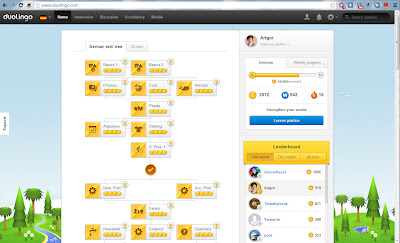 Currently the courses for German, Spanish, French, Italian, Portuguese and English are available.

And all this is completely free! Truly!
The site has an interesting system of funding... but you can learn about it yourself :)

I really like this site and feel than my German improved a lot thanks to it.


So I suppose I'll continue studying German for a while, but no more than a month, then a little rest and Japanese again with new method of learning.